Michelle Miller, traveled back to the Mecca to meet Vice President Kamala Harris’s line sisters who spoke on how both Alpha Kappa Alpha and Howard University prepared her path to the Vice Presidency. Monique Poydras, Dr. Elaine Witter, and Carla Mannings were initiated with Vice President Kamala Harris in 1986 in the Alpha Chapter at Howard University, the birthplace of this illustrious sisterhood. While the world was suddenly becoming more acquainted with salmon pink and apple green, Kamala Harris’s vice-presidential bid came as no surprise to her line sisters as they recalled how she was a natural born leader, always lending a hand to her Sorors, and performing at optimal levels as a student at Howard University.

Additionally, they spoke on how Alpha Kappa Alpha was at the helm of the election cycle, its long-standing history of civic engagement, and the collective power of its nearly 300,000 members. It is no secret that it was the Black women in major metropolises who despite extremely long voting lines, shortages of ballots, and technical issues with machines strolled to the polls in numbers and made way for Kamala Harris to become the first woman, the first African American, the first South Asian American, and the first Historically Black College and University (HBCU) graduate to be elected as Vice President of the United States.

The women of Alpha Kappa Alpha were especially visible this election cycle and sported their Ivy Box Stroll to the Polls t-shirts and Vote 2020 crewneck sweaters at voting booths across the nation. To capture and commemorate the moment, we launched our Voting While Gorgeous Virtual Photo Booth where thousands of Pretty Girls documented their civic activism. We then transformed the photos into a White House mosaic that was included in January’s Ivy Box!

The Ivy Times is very honored to have been a part of this historic moment in history, honored to call the women of Alpha Kappa Alpha our family, and honored to create fashions that you wear in your most important moments! 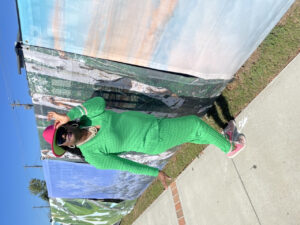